Extracts from the Book of the Dead :


The first chapters mainly refer to the God Amon of Thebes, and his consort, his wife with many names and faces, Mout - Sekhmet; (she was a ferocious lioness, and also Bastet, the cat who protected the home). Her cult was powerful in the period of the supremacy of lower Egypt..…

Osiris himself was the victim of a deluge brought about by the Creator, who wanted to bring the world back to its primitive state…


CHAPTER 167 - Formula to bring forth the sacred eye of Re by the soul of N.:

The text that Kha-em-Ouast, (the son of Ramses II) found in a holy book, (west of Memphis), is more valuable than any vases of treasure. It had been made in the portal of fire.

The Book of 'The One whose nature is mysterious(!)', found by Amenhotep son of Hapou, gave protection to all his family…

On the left: mourners at the tomb of Re-Mose, who was a Vizier under Amenophis III.
On the right: the ritual of the opening of the mouth done by a member of the family 70 days after death.


CHAPTER 168 - Worship of Osiris by the soul of Osiris N:

- When you rise into the sky in the presence of Re, all the mist from the river will disappear. You leave the bowels of the earth. You are pure--all your body has been purified by milk, beer and incense. The impurities have all been removed. The gates of heaven have been opened by Re, and Geb has been opened up to the grandeur and quality of your Akh spirit.

Thot, the ambassador of Ra is watching you from above as you come and go in the great hypostyle room; your Ka is with You, bringing you joy. You go up into heaven with the gods, who give Maat to Re; You are introduced to the gods of the Ennead and you are treated as one of them. You offer the Goose-Khar, (the father of the Geese-ro), to 'Ptah-who-is above the wall'. You are proclaimed just by the two gods of Maat (Hathor and Isis?)

Thot himself comes to you bearing the Book of holy words; he raises his hand towards the horizon, towards the place that your Ka desires. He did this for Osiris on the night that he departed his life.


CHAPTER 172 - The way to transfiguration in the empire of the dead:

I am pure, and pure are the works of praise which come forth from my mouth.

The soul of Osiris N. is very beautiful. Ptah and all the gods praise him, and each goddess says:

ORION, (The son of Re), and Nout (who brought the gods into the world) speak thus to one another.


CHAPTER 173 - Horus salutes his father Osiris. Many praises to Osiris by N.


CHAPTER 174 - The words to allow the spirit of Akh to leave the great door of the heavens:

The words of Anubis: Oh, One and Only true God, who has no equal; whose sacred eyes let you see all, and whose ears hear everything, express the symbols of life-force, as did Nefertoum. You, who knows the thoughts of the unhappy men in his heart and responds to their call, (as in the chapel at Karrak, where he was called "He who replies to the unfortunate." 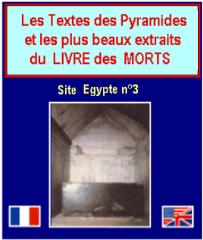 CHAPTER 175 - Words to ensure one does not die again.

When I am transformed again into a snake, (which men cannot see), I shall stay beside Osiris. I have performed many beautiful acts for Osiris, more than for any other God. I gave him the desert region of the necropoli. I prepared his place in the "barque of the people", and I made his son Horus the heir to throne in the island of flames.

- But will the soul of his wicked brother, Seth, (the symbol of evil), be sent to the West, unlike all the other gods? Atoum replies " :

The sound of praise spreads out over Herackeopolis.

Funeral chamber of Ramses VI. To the left: the mummies (full of bliss) receiving the rays of the sun. On the right: the executioners (in black) decapitate the souls of the damned and empty them of their blood.

"Oh Re who lives in Osiris" in all his glorious manifestations of the blissful gods of the west. The one form of the mystery of the Douat, the holy soul of the west. Your face is serene, Oh indweller of the Douat! Your son Horus is content with you and you have made him appear in glory to the inhabitants of the Douat as a great star, which belongs to the Douat and passes into the son of Re, the descendent of Atoum. Mourners scream for you, they hit their hands and moan, but you, your soul exults and your body is glorious…

Oh Osiris, you made me appear as a great star that brings all its wealth to the Douat. I have power over the darkness and I enter there, and leave. I have strengthened the scepter-djam of Orion and the headpiece of The One whose name is secret. I am the heir of Osiris who received his headpiece in the Douat. I am the successor of Re, and I am the mysterious pheonix. I am the one that travels the lower sky, following Re. I judge like Thot, I go with my heart filled with the dignity of 'The One whose possessions are Secret' in my appearances as the double god.


CHAPTER 181 - Formula to enter into the divine assembly of Osiris:

Words said by the soul of N. :

I salute you Osiris, who presides over the west; you appeared in glory as Re. He came to see you, being delighted with your beauty,:

- I greet you Osiris, son of Nout, for whom Atoum created prestige in the hearts of men, of gods, of the blessed, and to whom has been given the scepter of Heliopolis and many transformations. You are the possessor of great renown in the divine palace at Abydos, striking fear throughout the earth. Prince of the gods of the Douat, governor of the living, king of the dead, whom thousands (of souls) glorify at Kher-aha. Your sisters Ises and Nephthys come to you to fill your heart. With love for you they will enclose everything in their arms and reunite for you all the gods and the kas. They will adore you eternally...


on the left: columns of the temple in the shape of the goddess Hathor (Isis),
at Denderah (Upper Egypt).

on the right: the pensive face of the sphinx at night, which counts the millennia (see A. Rimbaud)


CHAPTER 182 - Formula to make the heart beat, that beats no more:

I am Thot, the excellent scribe with unblemished hands, the one that chases away pain and writes only the truth; I protect the Master of the universe. I am in charge of the laws which were written to govern the two banks (of the Nile)…

I am Lord of precision, the impartial witness of gods, who gives importance to the word so that it is venerated. I proclaim just the voice which is silenced. I make Re rest in Osiris, and Osiris in Re…

I am Thot, the one who announces the dawn, who has a perfect vision of the future.

I am Thot, who directs the sky, the earth and the Douat, and created human life.

I salute you, chief of the gods of the West, who redirects human beings back into the world, and they return rejuvenated. They are more beautiful than before…

After being justified by Osiris N. : you are living, renewed, rejuvenated, just as is Re every day!

He says: I come to you, Osiris, son of Nout, who governs over eternity. I am the descendent of Thot, who brought you soft breezes, life and lets your beautiful face prevail. The north wind comes to you from Atoum, O Master of the sacred Country.

He made the solar light shine on you and it has illumined for you the path of darkness.

Oh Osiris, your son Horus was proclaimed just before the Ennead, earthly royalty was given to him, and his ureus, was the entire earth.

The throne of Geb was assigned to him and the exalted duty of Atoum was written on a block of quartzite, according to the order of your father Ptah-Tatenen, who is on the great throne…

Happy are those who respect the God (Osiris) who is at Abydos, in the original nome.

I come to you, my hands bearing the truth, with a heart empty of lies and falsehood. I come before Maat because I know that I did not commit any injustices in this land, I have not injured anyone.

I am Thot, the Master of exactitude, who asserts the rights of those whose voice has been silenced. I am the protector of the weak and of those who suffer.

Oh Osiris N. , alive again; rejuvenated, there is nothing amiss where ever you go… You come with the day, you love the light and god comes to rest where you are.

The Dual doors of the other world are open for you; the doors of the Hidden Kingdom are broken down for you. The doormen rejoice at your coming and say: